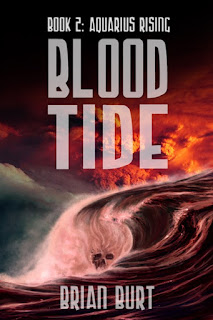 Today we're in for a real special treat! Award-winning author Brian Burt is here to talk about a new sub-genre of sci-fi, "cli-fi" (or, "climate fiction"). Since the first book in his series, Aquarius Rising: In the Tears of God, won the 2014 EPIC eBook Award for Science Fiction, I'm pretty sure he knows his stuff! Let's learn something!

I've always loved the way that science fiction as a genre has spread a big tent to welcome many different kinds of writing: hard SF, soft / sociological SF, space opera, alternate history, steampunk, cyberpunk, science fantasy, techno-thriller, you name it. There's something for every taste. Recently, a new sub-genre has emerged, grabbing media headlines and critical attention from sources as diverse as NPR and Wired. It's been called "climate fiction," or "cli-fi" for short. Catchy, eh? So what is this new category of fiction, and why does it matter?

Climate fiction reflects a growing movement among writers in and outside of science fiction who choose to develop their stories around a central theme of "what if global warming really does proceed unchecked?" What will the world look like if weather patterns alter dramatically, the cycle of seasons becomes unrecognizable, coastal mega-cities flood, large swaths of land become arid wastelands, and masses of people are forced to migrate away from their homes in search of less hostile environments? What kind of social and political chaos will result, and how will we cope? Will we try to geo-engineer a solution on a planetary scale, and what if there are unintended consequences? Will humans be forced to tweak their own genetics to adapt to the harsh conditions that constitute Earth's "new normal"?

These speculations provide a lot of grist for the mill of creativity and imagination. In some ways, frankly, that's nothing new. Some brilliant SF writers explored ecological themes long before climate change became a hot topic (pun intended); Frank Herbet's Dune series is a classic example, as are Kim Stanley Robinson's Orange County and Mars trilogies. I still remember getting chills from reading Ursula Le Guin's The Word for World is Forest.

When I finally worked up the courage to move from short fiction to attempting a full-length novel of my own (gulp!), climate fiction became a natural source of inspiration for my debut book in the Aquarius Rising trilogy, In the Tears of God. For SF writers, the age-old advice to "write what you know" becomes a bit tricky (since we're often imagining new worlds that nobody really knows). But I think it's wise to "write what you know you care about." Fiction isn't activism by any means, but infusing a story with themes about which the author is passionate will make it much more enjoyable to read.

And that's why, when I settled down in front of my MacBook to start that first chapter, I developed a bond with Ocypode the Aquarian, a member of the hybrid species of half-human, half-dolphin humanoids who have built thriving reef-cities amidst the wreckage of drowned Human cities. I imagined him floating near a submerged building, its sides now covered in corals, a rainbow of fish darting in and out of the encrusted window frames that provide entry into the dim, cavernous interior. I found his underwater world beautiful, mysterious, and dangerous; I wanted to learn more about it, and about him, and his desperate quest to conceal the secrets that he knows could rip Aquarian society apart. But when enemies above the waves unleash a genocidal war against Aquarius, he's forced to choose between the damage of revealing his secret or the risk that ignorance will destroy his entire race.

It's been a wondrous journey for me as a writer, and it's continued with the recent release of Book 2, Blood Tide. Book 3, The Price of Eden, is in progress. I can't way to see how it all turns out, and I hope you'll consider joining me. Give cli-fi a try. It impassions its practitioners, and you'll feel that energy in every scene!

Blurb:
Megalops is an Aquarian from one of the many reef-cities that thrive beneath the waves on an Earth transformed by climate change. Humans clinging to the barren lands blame Aquarius for their plight and unleashed the Medusa Plague that entombed Megalops's wife and daughter in stone.  Tormented by that loss, Megalops swears to avenge his murdered family by unleashing a Vendetta Virus as cruel and lethal as Medusa. Ocypode the Atavism and his allies battle desperate odds to prevent Megalops from igniting global conflict.  War demands sacrifice.  If Mother Earth and Mother Ocean wage war against each other, will anyone survive?


Brian Burt writes both short and novel-length speculative fiction. He has published more than twenty science fiction and fantasy stories in various magazines and anthologies. His short story "The Last Indian War" won the Writers of the Future Gold Award and was anthologized in Writers of the Future Volume VIII. His debut novel, Aquarius Rising Book 1: In the Tears of God, won the 2014 EPIC eBook Award for Science Fiction. Aquarius Rising Book 2: Blood Tide has just been released by Double Dragon Publishing. Brian works as a cybersecurity engineer and lives with his wife, three sons, a corn snake, and an aging white German shepherd in idyllic Plainwell, Michigan. The dog, in particular, remains unimpressed with his literary efforts unless they come with bacon.  You can sample Brian's writing at http://www.briantburt.com.