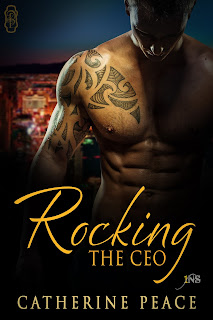 I love the 1Night Stand series, both reading and writing for it! Catherine Peace's latest installment, Rocking the CEO, is out today - be sure to check out her amazing cover, blurb, and excerpt!

This last year of Joss Richards’ life has changed for the better—or so she thinks. A new band, a new city, a new life, and, now, a shot at a contract with the hottest rock label around, ICE Records. If she and her bandmates can impress the label, her life will be set. Too bad her best friend thinks something is missing. When Joss receives details of the 1Night Stand date set up for her, she bolts—straight into the arms of a sexy stranger.

When August Bragg glimpses a red-haired goddess in the hotel lobby he can’t get out of his thoughts—or his fantasies. Unable to resist her lure, he indulges in a steamy encounter. Then learns her name, and he realizes his fantasies has left his heart in an ethical dilemma.

Will they give everything up for their careers, or can the man who holds Joss’ future in his hands also convince her to give him her heart?

Excerpt:
She stopped at the entrance and leaned against the wall. With her spiked hair, tight black Tshirt, the swell of her ass in those black skinny jeans, and spike-heeled boots, she personified his fantasy. How could he focus on his date Sunday night when this woman stood in front of him, the picture of everything he’d wanted for months?

He stopped next to her and tried not to stare, but her beauty captivated him. Bright-green eyes, a narrow nose, and a gorgeous mouth he wanted to taste so badly he barely withstood being next to her. Keep your composure. She’s a woman. A beautiful woman…. “Hello there.”

When she glanced at him, her eyes widened just a bit. “Hi.” Then she curled her lips into a seductive smile.

“You look a little lost.”

She shrugged. “Hard to be lost when you don’t have a destination.”

Gods, her voice…. Pure, raw, Southern sex appeal. “Where are you from?”

“Iceland.” He appreciated the interest in her eyes and the way she pursed her lips. “Your accent’s sexy.”

At the compliment, she actually blushed. “Thank you.”

“You’re welcome.” Shouting over the music started to get old. “Would you like to go somewhere?”

From the way her green eyes darkened, he knew her answer before she said a word.

No way they’d make it back to his room, not with the way he ached. Time for an alternative plan.


Catherine Peace has been telling stories for as long as she could remember. She often blames two things for her forays into speculative fiction—Syfy (when it was SciFi) channel Sundays with her dad and The Island of Dr. Moreau by HG Wells. She graduated in 2008 from Northern Kentucky University with a degree in English and is still chasing the dream of being super rich and famous, mostly so she can sit around in her PJs all day and write stories. When not being a slave to the people in her head, she’s a slave to two adorable dogs.