Promo - The Boss of Me, by Merryn Dexter 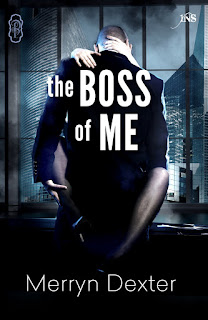 Time for another 1 Night Stand! Merryn Dexter's latest contribution to the ongoing series, The Boss of Me, comes out today. Ogle her spectacular cover for a few more moments, and then read on for an exciting excerpt!

Blurb:
Dear Madame Evangeline…
Lou Jones loves her job, but she can’t ignore the attraction she feels for her boss, Daniel Smith. She contacts the 1Night Stand dating service hoping a little fantasy role play will help her get over her crush.

This is fantasy, nothing more…
As they explore their every desire, Lou and Daniel find keeping reality at bay is harder than they thought. Will their 1Night Stand deliver the satisfaction Madame Eve prides herself upon, or are they just too close for comfort?

Excerpt:
“Bring the file here and place it on my desk.” He settled more comfortably into his chair, steepled his fingers beneath his chin, and admired the sway of her lush hips. She placed the file down as instructed then folded her hands in front of her, eyes still averted. Schooling his need with an iron control, Daniel waited.

Her chest rose and fell, the slight hitch in her breath pressing her breasts against the thin silk of her blouse. The tip of her tongue peeked out, dampening her coral-pink lips, and a bolt of lust drove him from the chair. Ignoring Lou, he strode to the door and locked it. He doubted there were many people left in the building at that time of day on a Friday, but he wouldn’t risk anyone interrupting them.

Pacing back to the center of the room, he stopped to admire the hourglass lines of her figure. The heels looked even better from the back. Balancing on their slender points gave extra definition to her calf muscles.

“Do you know why I summoned you, Ms. Jones?”

Her breath seemed to catch in her throat. Her voice barely above a whisper, she said, “No, Mr. Smith.”

“You will call me Daniel.” The visceral need for her to know who was about to touch her surprised him. He wanted to hear his name on her lips as she sighed, moaned, and fell apart at his command. Her head bobbed in acquiescence, and he spoke again. “I summoned you because you canceled our appointment this evening.”

She half-turned, seemed to catch herself, and straightened to face the front again. A thrill of satisfaction curled in his gut. Each little act of submission from her proved sexy as hell. “Did you do as I requested?” he asked. Her skirt clung to her hips and ass with no hint of a panty line, but he couldn’t be sure.

A bolt of lust rocked him on his heels. He wanted to crawl on his hands and knees and fawn at her feet, but she had been very specific in her email—her fantasy required him to be the boss, to take control and dictate his desires upon her.

“Show me.” The rasp in his voice couldn’t be helped; his body tingled with anticipation. Her hands gripped the hem of her skirt and began to raise it, inch by tantalizing inch. The material cleared the back of her knees, gliding higher to reveal the lacy tops of her thigh-high stockings, the soft expanse of her tanned thighs.


Merryn Dexter is a military spouse who, after a varied employment career (from selling sandals to old ladies with bunions to being a health and safety coordinator for a construction company), is thrilled to be pursuing her dream career as a romance writer. She likes The Winchesters, Spike, Hotch, Loki and watching complicated European Noir. Her hobbies include crying at books, crying at movies, crying at tv serials (there’s a theme!) and believes all stories should have a Happy Ending.

Forging Ahead Into the New Year

Happy New Year! Okay, I'm a couple weeks behind. I'll be honest - while I do love the holiday season and it's one of my favorite times of the year, part of me is really glad to be settling back into our usual routine. I was a creature of habit even before having kids, and now I have two little people who benefit from having structure. So even though it was great being around friends and family, celebrating and doing other fun stuff, I'm not terribly disappointed that it's all over.

With that return to normalcy comes a new burst of writing energy! I've noticed this for a couple years now. Something about the new year gives me the push I need and I get a lot done in the early months. I wish I could bottle up whatever it is and whip it out in, say, August, but I'll take what I can get. Who knows, maybe the darker, colder months just lend themselves to better writing when there's little else to do.

I'm moving right along on Seductive Suspect. The chapters are getting longer; I plan to finish one this week, and then I only have two more, plus an epilogue. I'm on track for my estimated word count, and I have very firm plans for the final chapters/epilogue. When I started this book, I had a pretty comprehensive outline for a change, but there were still some blanks that needed filling in, and I struggled there a few times. For where I am right now and one point near the climax, there's a couple minor little details I need to work out, but I think/hope it'll be smooth sailing until the end.

I'm all about realistic deadlines. Knowing real life can get in the way, I *think* I can be done with this and ready to submit by the end of February. I have a few weeks of wiggle room, but I NEED to be done by mid-March. Why, you ask? Some major life event? An exotic vacation? Vanishing in a glamorous poof of mystery?

Nope. Mass Effect: Andromeda comes out then. I pre-ordered it a while ago, and since I'll only be able to play in the evenings once I have it, I anticipate it's going to take me a loooooooooong time to get through it. As they say in the games before the final quests, I'd better wrap up any unfinished business before then, since I'll be disappearing off the face of the earth for a while. ;)
Posted by Thea Landen at 2:47 PM 2 comments: