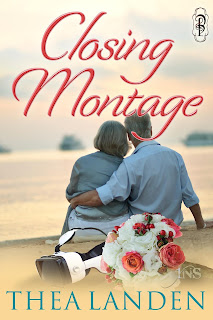 After some whirlwind rounds of editing, Closing Montage hits the e-shelves today! As always, I'm thrilled with the cover design here - very Nicholas "Imma make some women cry" Sparks-esque. ;) Get the tissues ready, because this one's a tearjerker! (In case you couldn't tell from the blurb, which makes the ending pretty obvious....)

Edwin Crawford is dying. His suffering is made even worse when he considers how he’ll be leaving behind his wife of over four decades. He contacts 1Night Stand and instructs her to communicate with Madame Evangeline in the hopes she’ll find another man and won’t be lonely without him.

Abigail refuses to entertain the idea of pursuing a romance with anyone other than her husband. When Edwin continues to insist she use the dating service he found for her, she eventually agrees. But he should realize, she reasons, once she makes up her mind about something, she’s determined to do it her own way.

With Madame Evangeline’s help, Abigail plans the perfect evening. Through the use of virtual reality, she can take Edwin anywhere she wants, across the world and back in time, without him having to leave home. It’s their last chance to remember why they were so deeply in love for so many years. Even though she defied his wishes, can she convince him to go on one more date?

The modest colonial looked mostly the same as it had when I’d arrived home earlier in the day, though the paint was one shade lighter and weeds covered the flower beds flanking the walkway. I climbed up the steps and pushed open the front door. The hallway’s original dingy tiles greeted me, leading the way onto faded linoleum beneath our old, scratched kitchen cabinets. The house had been in need of updating when we acquired it, but from day one, it had felt like home.

Edwin appeared behind me in the doorway. “It’s empty,” he said, stating the obvious. “I guess this is the day we became homeowners?”

“Yup. We finally reached true adulthood by taking on the responsibility of a mortgage and property taxes.” I stepped into the foyer and spun around. “But most importantly, we had a place to make our own.”

I walked through the first floor, taking in all the details that had been rendered with surprising perfection. The shag carpet squished beneath my feet in the dining room. I smiled at the memory of when we’d discovered the beautiful hardwood floor underneath. The crooked closet doors squeaked when I opened and closed them, and the scrapes on the kitchen countertop felt rough beneath my fingertips. Back in the real world, little of our house remained in its original condition. Remembering its earlier state filled me with warmth, even as I relived its flaws.

Edwin leaned against the counter, hands clasped in front of him. “It’s hard to believe we ever fell in love with this place.”

“Are you kidding? At the time, this was paradise for us, a dream come true.” I rubbed my nose. “And we did get a pretty good deal on it since it needed a lot of work.”

“Fair enough.” He closed his eyes. “If I think back far enough, I suppose I can recall feeling like a king in his castle, shabby though it was.”

Resting his head on his hands, he exhaled. “And it did make me feel good to accomplish this goal with you.”

I stood next to him and laid a hand on his shoulder. Turning, he looked up at me. Some of the boyish softness had disappeared from his face since the first simulated scene. Age and experience had never made him less attractive to me, though, especially with those stunning eyes that seemed to stare into my soul. “I’m glad to hear it,” I said, rubbing his arm. “That’s what I wanted tonight to be about.”

He straightened, closing the gap between us. The first hints of a wicked grin played upon his lips. “Other things about our early days here stand out to me, too.”

I swallowed. He toyed with the ends of my hair, his fingertips grazing my bare skin as he brushed it back. “Oh?”

One arm snaked around my waist. “How we made this place truly ours. I think we christened every room in this house within the first week.”

I giggled, and my cheeks flushed. “And that was before the furniture even arrived.”

“I believe your words were ‘who needs a bed?’” Edwin’s hand came to rest at the back of my neck. I inched closer to him, craving more of his touch. “As always, you were right.”

My body flattened against his when he moved in for another kiss. Our lips collided with force this time as his fingers fisted in my hair. Sentimental memories slipped away, replaced by the recollections of the more salacious feelings he awakened in me. I grasped the front of his shirt, my knees weakening.

A low growl rumbled in his throat, and his tongue plunged farther into my mouth. Seizing my wrists, he backed me against the refrigerator, trapping me with his full weight. Heat bloomed between us, a stark contrast to the unyielding cold behind me. The dizzying sensations intensified, everything from the taste of his mouth to the pressure of his grip melding into a surreal haze.

My hips rolled up as if drawn to him like a magnet. Sparks ignited over every inch of my skin, yet something held me back. “Wait,” I managed to get out between labored breaths.

“Hmm?” He abandoned my lips to kiss a trail down my neck.

I writhed beneath him when he reached my collarbone. “We can’t…I mean, you shouldn’t…not yet….” Shaking my head, I moved to the side and reached for his face to angle it toward mine. Breaking our contact felt like torture, but worry plagued me. “Let’s slow things down for now.”

Edwin refused to let go of me. “I don’t want to stop.” Hunger burned in his deep-set eyes, and his fingertips dug into the underside of my wrists. “You know what you do to me, Abigail. You’ve given me this younger body for the night, so why not use it?”

The edge in his voice, which had been absent for so long, drove me wild. Still, our love was about more than lust, and my concerns won out. I wiggled one hand free and groped around in my pocket.

At the push of a button, we were whisked back to our bedroom, in the same position atop the covers as we’d been when we’d started our date. Edwin removed his headset and looked at me as I did the same, annoyance tempered by confusion. “What happened?” he asked.

I fluffed out my hair, which had returned to its shorter, graying state. “I wanted to make sure you were okay.”

He crossed his arms, the movements stiff beneath his pajamas and bathrobe. “Was I complaining?”

Dropping my gaze, I fiddled with the corner of the bedsheets. “No. But I admit I don’t know everything about how this stuff works, and I didn’t want you to get overtired, and—”

“Abigail, I’m fine.” The words came out in his usual level voice, though there was a hint of sternness to them. “Haven’t I been voicing any concerns as they’ve come up?”

“I know, I know.” A long sigh left my lips. “I’m fussing over you too much again, aren’t I? I need to remember I’m not one of the nurses.”

Edwin reached over to touch my hand. “It’s okay.” He drew his thumb across the top. “If I start to feel unwell, I promise I’ll let you know, all right?”

“You don’t have to apologize.”

I held up the pair of headsets. “Should we pick up where we left off, then?”

He smirked. “I think the moment’s passed.” When I frowned, he shook his head at me. “Let’s keep going,” he said, folding his hands behind his head as he reclined. “I want to find out what else is in store for me tonight.”

Before replacing his equipment, I knelt and pressed my lips against his forehead. “Whatever makes you happy.”

His words sounded muffled as I adjusted my own headset. “You make me happy.”

The Fall of the Midnight Scorpions

The Edge of the Sphere