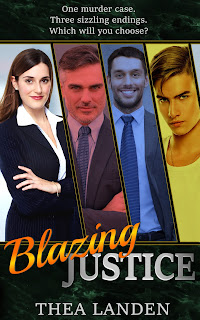 It's release day! As promised, my little experiment with Choose Your Own Adventure-style romance is available on Kindle now. Free for Kindle Unlimited people, $2.99 otherwise, because formatting this thing was its own adventure. I'm working on setting up some promo events, so as always, watch this space. (Standard reminder about signing up for the mailing list.)

In the meantime, here's the blurb and excerpt. Happy reading!

In the suburbs of New York City, prosecutor Celeste McConnell is called to a crime scene in the middle of the night. The gruesome stabbing is the most brutal murder the quiet little town has seen in many years, and both the police and the District Attorney’s office are determined to arrest and convict the killer. Celeste is resolved to follow the proper procedures and seek justice for the victim, but as the case progresses, she wants to be sure the right person is held accountable for the crime.

Choose Celeste’s path in her quest for the truth and decide who she can trust the most. Whether she follows the lead of her suave, assertive boss at work, confides in the charming and sweet detective assigned to the case, or embarks on a thrilling adventure with the potentially dangerous murder suspect, each unique ending offers an unforgettable night of passion for Celeste and her chosen partner, as well as a conclusion to the murder case that brought them together.

Chaos erupted at six o’clock on the dot, when several things happened all at once. “This is getting ridiculous,” Lattimer said. The force with which he stood up sent his chair skidding backward into the wall. “I don’t know what else I can tell you, and I’d really like to go home now.”

My cell phone rang again. “Celeste? What is going on over there?” Hints of annoyance tempered Colin’s voice. “I expected to hear from you by now.”

As I filled him in on what had happened since arriving at the police station, two more officers entered the room. They spoke with Captain Redding, whose eyebrow shot up at whatever they told her, and she looked over at me. “Hold on one second,” I said into the phone.

“They came from the crime scene,” the captain told me. “And they found a bloody knife in a garbage can behind Nick Lattimer’s unit. We won’t know if it’s Sherri Strahan’s blood until the tests come back, but….”

“Right.” I turned my attention back to the phone. “I don’t know if you heard any of that, but what could possibly be the murder weapon just turned up near Lattimer’s apartment.”

“Hmm.” Colin sighed. “Between this discovery and the thing with his brother, it’s enough. I don’t want this guy disappearing on us.”

Lattimer paced back and forth behind the table. “You can’t just keep me here like this,” he said, moving toward the door. “I’m leaving.”

That was my cue. I entered the room; now it was my turn to block his path. For a fleeting moment, our gazes locked together. His gold-flecked eyes burned into me and my breath caught in my throat.

I looked away and swallowed. “Arrest him.”