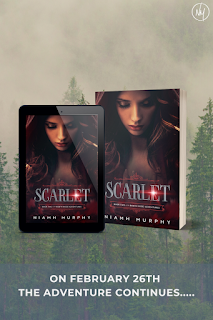 Action! Adventure! Awesome women! Fellow author Niamh Murphy has a new book out today, the second in her gender flipped Robyn Hood series. Keep reading for the blurb and a fun excerpt!

Robyn Hood and her loyal friend Littlejohn want nothing more than to stay one step ahead of the Sheriff of Nottingham's men.

But when they offer their help to a Holy Sister in need, they soon discover not all is as it seems.

Now they have both the Sheriff of Nottingham on their tail and the self-serving Bishop of Hereford too.

Will they aid a fellow thief? Or save their own necks, keep the gold for themselves, and leave the fugitive, sword-wielding rogue for the gallows?

Find out in this brand new Robyn Hood Adventure!

As Robyn went to follow the two women into the chamber block, Marian paused at the door. She glanced behind her into the gloom where Sister Mary had disappeared then finally looked up at Robyn. “Do you trust this woman?” Her voice was a low whisper, and Robyn had to lean forward to hear her words.

She nodded, then winced at her easy lie. “Well,” she admitted, “she did steal from Littlejohn and me.”

Marian raised her eyebrows and sighed; she opened her mouth to speak but merely shook her head.

“I do trust her though,” Robyn added quickly, thinking of the young woman’s vulnerability, how many times Robyn could easily have ended up being Nottingham gaol herself, and how it was Robyn’s fault that the poor young nun had been captured by the sheriff's men and so badly wounded by a trial.

“Why, Robyn?” Robyn recognised that tone, it was the same tone that Marian had always used when Robyn had suggested they swim in a freezing cold lake, or travel to the next county on a whim, or ride their horses over ever-higher obstacles.

“I…” Robyn started to explain but her confidence and charm abandoned her. “I see something in her, something… like me.”

“I see.” Marian nodded, there was a bitterness to her smile that Robyn didn’t recognise. “I had wondered why I hadn’t seen you these last few weeks.” Robyn suddenly realised what the cause of her bitterness was and immediately tried to repair the damage. “No! It’s nothing like that, I mean-I’ve only just met her...I - I haven’t seen you because I didn’t want to put you in danger. I’m still not clear of the sheriff's men, Marian, I couldn’t risk leading them right to you.”

“You risked it tonight.”

“But...That’s different; she needed help. I had nowhere else to go.”

“And... I understand.” Marian looked away and tried to shut the door but Robyn held it open.

“No, Marian, please, I wanted to protect you.”

“I know.” But she still wasn’t looking at her and Robyn felt that with every word she said Marian was pulling even further away.

“I have been desperate to see you,” Robyn whispered.

She lowered her voice, all too aware of Sister Mary waiting for them in the room beyond. “I’ve thought about you every day we’ve been apart.” Marian sighed but she still didn’t look up. “Have you?”

Robyn reached out to take her hand, why was Marian slipping away from her? What could she do to bring her back? “I’ve thought about our kiss.” Marian looked up then, and her eyes glistened. “Then why-” she cut herself off as her voice cracked. “Then why have you not come to see me?” Robyn opened her mouth but was unable to conjure a reply. She’d thought Marian would be delighted to see her again. Not driven to angry tears. “If I had put you in danger-”

“In danger?” Marian spat, “You think rescuing your mother from the clutches of the sheriff’s men did not put me in danger?”

“You think coming here tonight did not put me in danger?”

“Have you ever thought I might be worried until I am sick with it? Thinking each day would be the day I would hear of your death? That every time I enter Nottingham it will be your body I see swinging from the gallows? Did you ever think of that?”

Slowly, Robyn shook her head, feeling the guilt writhe in her stomach. “I didn't.”

“I’m sorry,” Robyn said, aghast and unable to think of anything else, “I had no idea.”

“Of course you had no idea!” Marian hissed, “You never thought to ask!” Robyn opened and closed her mouth several times. “I just wanted to keep you safe,” she said, but her voice sounded weak.

But Marian shook her head. “It's not up to you to keep me safe. It’s not up to you to decide when I should and shouldn't place myself in danger,” Robyn opened her mouth to argue but Marian interjected before she could speak. “It’s up to me.” Marian stared at her and took both Robyn’s hands in her own. “I thought I was your oldest, dearest and closest friend-”

“But you trust strangers more than you trust me. This Sister Mary of yours and that giant Reynold Littlejohn-”

“Littlejohn is a good man.”

“I’m sure he is Robyn, but it still hurts that you trust him more than you trust me.”

“I couldn’t bear it if anything ever happened to you because of me.” Marian shook her head and looked up at her. “And I can’t bear being cut out of your life like this.”

Marian took a deep breath and nodded. “I know,” she whispered, “But… what does that mean to you?” Marian waited a moment for Robyn’s reply and when it didn’t come, she shook her head, and stepped back, shutting the door in Robyn’s path.

Robyn lay her hand and then her head on the wood as she heard the bolts close. “It means everything,” she whispered.

Niamh Murphy is an author of adventure books with lesbian main characters. Her mission is to write exciting and engaging stories with women taking centre stage. She tells stories of gripping high seas adventure and epic fantasy, with a dash of romance and loves to explore historical settings, science fiction landscapes, and fantasy worlds. She lives in the ancient town of Colchester in England with her partner.

Yup, you can keep your minds in the gutter, because this post is about exactly what you think it's about: which characters dominate your sex scenes? As I was chugging along on A Flame Among the Stars, I started thinking about how in most romances, one half of the couple is usually more forward or dominant than the other. Sometimes it's evenly balanced, sometimes it pings back and forth...and sometimes what happens outside the bedroom is different from what happens inside.

For a fun experiment, not only will I be exploring this in terms of gender, but also the point-of-view, as I have a hypothesis.

A Flame Among the Stars: This is a lesbian romance, so both halves of the couple are female. Meg, the POV character, is definitely the more dominant one for most of the book, though Celendra gains confidence and starts taking charge at points. What got me thinking about this whole subject is that it had been a while since I wrote from the POV of the more dominant character, but more on that later.

Hunting Astrid: Another lesbian romance. The book is from Astrid's POV, but Tabitha takes the lead for most of their intimate encounters. Again, though, Astrid has her own moments of being in control by the end.

Blazing Justice: This one's interesting because we have one POV character (Celeste) with three different endings. Without giving two much away, in two out of the three endings, the men are clearly more dominant, but it's more evenly matched in the third.

Fire Beyond the Frost: More lesbians. Catalina (POV) has no problem being in command of an operating room or jumping into action in case of medical emergency, but she's always been far more reserved in her personal relationships. This actually doesn't change much throughout the book, but Sari's there to guide her along nonetheless.

Closing Montage: Hmm. After some consideration, I'll say that Abigail (POV) and Edwin are pretty evenly matched, but I might give a slight edge to Edwin. It's close, though.

Seductive Suspect: Adam calls the shots as soon as he gets Veronica (POV) into his bedroom, hands down. This was one of those instances where I had that scene all planned out in my head for a while, but since I write in order, it took me a while to get there. Even so, I didn't lose any of my enthusiasm for it, and Adam's running this sexy show.

Out of Orbit: This was fun because both Jasmine (POV) and Aras are absolute powerhouses in their roles/careers before they meet, so what happens when they finally get together? The answer - Aras is the one in charge, but Jasmine doesn't mind in the slightest.

Flight of the Dragon Queen: Here's another one where it might be too close to call between Caleb (POV) and Alizeira. If I absolutely had to choose one or the other, I guess I'd say Alizeira is the more dominant of the two, but really, it's by the tiniest of margins.

Elysium: This one might buck the trend in multiple ways - not only does the POV alternate between April and Drew, but they each get their own sex scene where they're the POV character and each one is the more dominant one when we're inside their head. Again, it's a small difference, but that's my analysis.

Second Skin: The POV alternates between Anna and Brendan here, too; however, once they're behind closed doors, it's from Anna's POV, but Brendan is more dominant.

So, what have we learned? For the hetero romances, I thought the men would be more dominant, but while it skews a little in that direction, it's not always the case. What appears to be the bigger predictor? The POV character.

I'm too lazy to go through and tally it up, but it does seem like the POV character is less likely to be taking charge in the sex scenes. In a way, it kind of makes sense - it might be easier to envision yourself in a character's place when something is being done to them, rather than having them being the one doing the...doing. I won't get too far into fantasies and preferences and whatnot here, but if you're reading romance for an escape, letting someone else come in and handle everything can sound appealing. With the POV character, we see, hear, and feel everything they're experiencing; it's not that we, the readers, always want to take on a passive role in our own lives, but I can see how it's logical for the POV character we're reading about to be on the receiving end of all those fun sensations. You could argue the opposite, of course, and I don't think there's a right or wrong answer. In the future, I'll be paying attention to this when reading romances and trying to determine who's more likely to play what role with regard to POV.