The Fall of the Midnight Scorpions - Available Now! 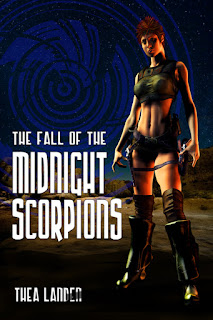 It's here! The Fall of the Midnight Scorpions has been released! I have some fun promotional events coming up in the next few weeks, so be sure to watch this space. In the meantime, have a blurb and a nice, long excerpt!


A year has passed since Ro Bernard escaped from the Midnight Scorpions, a clandestine group of mercenaries that exists in the outside world as little more than myths and rumors. Though haunted by the reprehensible acts she committed and witnessed as a member of the organization, her primary focus is keeping a roof over her head and food on her plate. A chance encounter leads her to Karin Cassels, whose son died in the Scorpions’ underground laboratory. While sharing details about her son’s research, Ro reveals the most disturbing information she has on the group. Their leader, scientist Dane Zedek, has been integrating cybernetic parts with human soldiers in the hopes of building himself a lethal army that will help him achieve even greater political power.

The women hatch a plan to take down the Midnight Scorpions with two ultimate goals: kill Zedek, and rescue Callum, Ro’s lover who was the first of the scientist’s experimental hybrids. For additional assistance, Dr. Cassels directs Ro to Reggie Quinn, a drifter who is no stranger to odd jobs and risky situations. Reggie agrees to join the cause in exchange for a percentage of whatever they loot from the Scorpions’ base.

They embark on an adventure throughout three warring countries to assemble their team and gather the necessary materials for their schemes. Along the way, Ro tries to fight her growing attraction to Reggie, especially as reminders of her unhappy past keep resurfacing. Love and redemption wait for her at the end of her mission to defeat the Midnight Scorpions…assuming she makes it out alive.

Excerpt:
Ro turned around and bent over the map again. Using her previous markings as a guideline, she labeled another potential point of entry to the hidden lair. Before she could measure the distance to the next area she wanted to denote, the door opened again. “Forget something?” she asked without looking over her shoulder.

“I just wanted to check in and see how you were doing,” came Reggie’s voice. “It’s getting late.”

He appeared in her line of vision, standing at the opposite end of the table. “The map’s coming along,” she said. “I just hope I’m remembering all of this correctly.”

Reggie nodded towards the door. “I saw Mielle come out of here. Everything all right?”

“Yeah, we’re good.” She narrowed her eyes at him. “So now you’re tracking Mielle’s comings and goings? Maybe you should be socializing with her at this late hour instead of me.”

“If I wanted to spend extra time with Mielle, I wouldn’t have come in here.”

“Uh-huh,” she said. “Hey, at least with her around, we can count on Ted to shower on a daily basis in order to make a good impression.”

He laughed. “While I was worried about having to wipe the drool from his mouth when we first met her, I don’t think Mielle’s going to be the motivator for Ted to behave himself. He’s got it bad for Zara.”

“Oh, really?” Ro smiled at this tidbit of amusing information. “What did he say to you?”

“What, is there some sort of psychic connection between cousins that I don’t know about?”

Reggie placed his palms on the table, bringing his face closer to hers over the map. “Come now, Rosie. Don’t tell me your astute powers of observation have been failing you. Every time he looks at her, it’s easy to tell what he’s thinking. It doesn’t take a mind reader.”

“Subtlety is sometimes lost on me.” She didn’t back down from him. “Don’t tell me your powers of observation have been failing you when it comes to me being rather direct, if not blunt.”

“No, I definitely got that.” The golden flecks in his eyes shimmered in the wan lighting. “An argument could be made for either approach.”

Ro blew out a puff of air. “I never had the patience for silly games.”

“Too bad. Games can be fun.” He pushed off the table, straightening up. “So show me what you’ve done so far,” he said. “I’d love to know how many secret doors and tunnels I’ve passed by without knowing it.”

“Fine,” she said. “The closest one is about thirty miles—”

“Hold on. I don’t want to have to read upside down.” Reggie walked around the table and stood behind her, leaving a narrow gap between them. “Sorry, go on.”

She knew what he was doing and continued as if he hadn’t moved. “As I was saying, the nearest entrance is about thirty miles from here. We might want to go scope it out in the next couple days and see how it looks.”

He peered over her shoulder, his mouth close to her ear. “It’s a good start,” he said. “And I’m sure you have some backup plans.”

His breath tickled her skin. “There were quite a few ways in and out of the base. Elevators, ramps…different areas were used for different purposes,” she said, keeping her voice even and casual.

Warm sensations skated down her neck and flooded through her chest, but Ro wouldn’t give him the satisfaction of squirming or wriggling away. If it’s a game he wants, it’s a game he’ll get. “There’s a big set of doors over here to the northeast,” she said. As she leaned over to the side, she made sure her ass grazed the front of Reggie’s body. “We used it to take the trucks and other vehicles out. It’s probably easy to get into, but it’s pretty far away from the command center. Traveling through the underground tunnels extensively might make us easy targets.”

“And we don’t want that.” The low tones of his voice hummed through her.

“Now, further to the south….” She backed up to indicate a lower portion of the map, pressing against him. Something hard met her in return. “This one’s closer to all the labs and armories and other places of interest, but that means it’ll be more heavily guarded, of course.”

“Every route is going to be risky, but maybe we can find some middle ground.” He rested a hand on her side, cupping the swell of her hip. “See, I knew my confidence in you wouldn’t be misplaced.”

His thumb stroked her back through the thin fabric of her shirt. Though flames flickered up her cheeks, she rolled her eyes and bit back a grin. “You know, if this was supposed to be some sort of lesson in understated advances, you’re not as discreet as you think you are.”

“I wasn’t trying to do or be anything.”

Slowly, Ro turned around. Reggie didn’t release her from his grip, nor did he do anything to untangle their legs and put some space between them. Propping herself up on one hand, she tilted her head back to stare up at him. She’d admitted some attraction to him in her solitary moments, but had sworn not to act on it. Now that one strong arm was curled around her and she stood face-to-face with his alluring smile, she didn’t know whether to give in to her impulses or push him away.

“You’re going to smudge the map.”

She looked down at where she had planted her sweaty palm right over one of her larger markings. “Damn it,” she muttered, rubbing the silvery graphite smears off the heel of her hand.

“I’d better let you fix that.” Reggie stepped backwards and ran his fingers through his hair. “Try to get some sleep tonight, though.”

“Yup,” she said without glancing up. “You too.”

He left her alone in the quiet room. Ro inhaled and exhaled, trying to quiet the pounding of her pulse in her ears and ignore the heat that had crept throughout her body. Shaking her head, she smoothed out the wrinkles in the paper in front of her before resuming her work.

Email ThisBlogThis!Share to TwitterShare to FacebookShare to Pinterest
Labels: excerpt, release, sci-fi, The Fall of the Midnight Scorpions