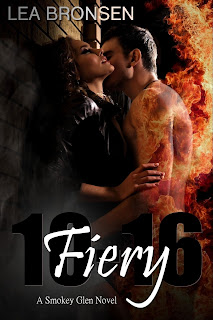 I'm taking a short break from playing Mass Effect: Andromeda (more on that soon, just know that it's GOOOOOD) to bring you a hot Hot HOT new release from Lea Bronsen. Seriously, there's plenty of fire and heat in Fiery 10-16, a dark romantic suspense. Keep reading for the blurb and featured excerpt!

Blurb:
Runo Wiggins is a scarred man, the wounds etched into his psyche deeper than those on his skin. But he loves his job: fighting fires helps reenact his survival of a house fire as a teen, one that killed his mother and brutal stepfather.

Dawn Caravello is married to a psychotic drunk. She can take his beatings as long as he doesn't touch their children, and she'll do anything to put food on the table, even if it means stealing from the town hero.

When Runo meets the fiery Dawn, sparks fly. But he suspects she is victim of the same abuse as his mother was. As day turns to night, the past and the present blend in an exhausting, nerve-wrecking chase to prevent another death.

Excerpt:
Dawn's eyes shimmered with a mix of stubborn pride and extreme sadness. They seemed to be made of molten brown stone. Runo had never seen eyes like these. So vibrant, saying so many things. They revealed her life, her endurance, her dreams, her combats, her despair. And she was still so young.

While he stared, she leaned forward and kissed him, an act a whole lot more intimate than he was comfortable with. A short, hard peck, a statement. Not the tender gesture a kiss was supposed to be, but one telling him her gratitude as well as her dignity. She thanked him, but was going to go back to her life and continue fighting.

He stood shocked, his entire body rigid, didn’t know what to do. She, such a small woman thing a whole head shorter, shook him, a giant of muscle and stupid testosterones inside a hard shell.

He would definitely take care of Dawn and her kids. Any way possible. Alert the authorities and make sure they got the protection they desperately needed.

She stepped backward, her features softening, and turned on her heel.

He cleared his throat and called, lifting a weak hand. “Hey, wait!” His heart hammered in his chest, blood pulsed in his ears.

“Promise to be good. Promise it’s the last time you do it.”

“Do what?” Her eyes gleamed with humor. “Kiss you?” In the midst of this emotional turmoil, she found the strength to tease.

She pursed her lips, looking like a disappointed little girl. Maybe she still was a child inside. A child taking care of children. A child beaten savagely.

After several long seconds, she nodded. But her gaze told a different truth.

Email ThisBlogThis!Share to TwitterShare to FacebookShare to Pinterest
Labels: promotion